Last week I attended a conference which was about unlocking the Senior Civil Service  http://www.unlockingthescs.co.uk/to aspiring Grade 6 & 7’s (or Paybands 7 & 6’s in new speak, or Range E’s in Treasury speak), hosted by the First Division Association (FDA). For those of you who don’t know, the Civil Service has many unions.

I’m a Grade 7, and a proud member of the PCS which generally represents people in jobs below Grade 7. The FDA http://www.fda.org.uk/represents Grade 7 and above – the Senior Civil Service. Of course the majority (from my own experience only) of SCS tend to be on the male side, late 40s-50s, white, middle class etc and the higher up you go the more into Oxbridge land you find yourself in.

I struggle at the best of times to identify with Senior Management and thus the FDA. I found it slightly arrogant that the conference organisers just assumed that we were all FDA members. I’m not, and have still yet to be convinced to join.

I may be white, but certainly aren’t male, or had the benefit of an Oxbridge education, with all the contacts that go along with that. I’m also not a ‘policy’ person, I live in the murky world of Finance Systems, Data Quality & Integrity so there’s not an abundance of ‘contacts’ in that area. Whilst I have seen some improvement in the SCS with a slow but gradual increase in the amount of women and non-white people, there’s still that Oxbridge/middle class barrier that seems to be there. We were told at the conference that the old saying “it’s not what you know, but who you know” still applies. You need to network, you need the contacts. You need to know the ‘right’ people to get these SCS jobs.

Riiiiiiight. Well that’s me screwed then.

I’m not a fan of these ‘networks’.

I don’t know how I’m supposed to relate to people that have no idea what it’s like to grow up on the breadline, go out on strike or a march for a cause you believe in. I cringe at the thought at having to stand at functions with a glass of wine and ‘hobnob’. Don’t get me wrong, I like a glass of wine, I love a drink. I love being down the pub with friends and socialising with like minded people. That’s why I love Social media and social networks, I can quite happily talk to people I’ve met through Twitter etc because they are like minded people, who to me are genuinely interested in the topic we are discussing, and it’s not about what ‘grade’ you are. It’s about what you can do to make things better.

I just feel completely alien in the civil service networking situations, it feels false, it feels akward…. it feels like your only there to move on up the promotion ladder. Who can you connect to? Who can you do a favour for? Who can you stitch up to move on up? Have you covered your back sufficiently enough?  But I guess that’s the same in all large organisations, and not just the Civil Service. I shouldn’t be just looking inwards at the civil service and saying it’s all bad, there’s some damn fine people there working hard within an environment that is down right hostile at times, especially with the latest round of attacks on the Civil Service by the media and our own political masters.

“the Civil Service needs to be smaller, more strategic, with less direct delivery”

Like many Team Leaders, I’ve run a team that’s a mixture of permanent staff and contract staff (to ensure that I have the right skills mix). It’s breaking my heart to see teams being ripped apart, people moved into posts that they don’t want to be in(or have the sufficient skills to perform adequately) because we are losing all contract staff as part of the recruitment freeze, and next year once the new Spending Review comes into effect the cost cutting is turned to permanent staff, it’s only going to get worse.

I’m spending more and more of my time filling out HR Justification forms, business cases, staff organograms, staff objectives, tasks and deliverables to justify keeping my team together – a whole cottage industry has sprung up requiring more resources to justify the process of scrutiny and review of these requests. I’m not the only one going through this – I imagine this is replicated all throughout Government Departments with the recruitment freeze firmly in place, with less of my time actually being spent on the actual ‘job’ as I wade through all the various forms and processes.

I’m struggling to keep motivated in an environment where I’m being told to lose staff, to drastically reduce costs (targeted, thought out cost reduction is not a bad thing) to the point where I simply don’t know how I’m going to deliver against my objectives because I just simply don’t have the resources or skills within my team to get the work done.

Which kind of goes against what I was being told by one speaker at the conference;

What team? Teams are being downsized, training budgets being taken away, opportunities being reduced. If this keeps on continuing I might not have a team, hell I might not be a civil servant no longer – and that was also alluded to.

“If you don’t like your job, leave the Civil Service”

….. Whilst that might help reduce the spend of Departments it hardly helps with my already dented morale.

I thought I was alone in my despair, disillusionment and confusion – but I’m not. I’ve been contacted by many civil servants via Twitter who share the same fear, worries and concerns. Surely it can’t be healthy for us all to be feeling that way?

When I was ‘tweeting’ from the conference (you can download the tweets here http://spreadsheets0.google.com/ccc?key=tFF35LZcsUw63qMyvgfMM0A#gid=0 or simply to a search on Twitter using the hashtag #SCS2020), sharing the traditional conference experience with those civil servants who perhaps couldn’t have afforded the £250 ticket price tag and questions where raised from the Twitterverse.

It was a ‘traditional’ conference, you know the type. You are all herded into a large room, given name badges and sit in the auditorium whilst the range of speakers speak *at* you for the majority of the day.  It was a shame that there wasn’t a live feed of the conference onto the internet to allow civil servants across the UK to watch the event, or a monitor screen with a live TwitterFall of the #SCS2020 hashtag to allow civil servants to interact with the speakers ( at Q&A time).

Surely in this era of cuts and doing more with less, the days of the traditional types of conferences are over? Why hire out huge rooms in rather opulent buildings? 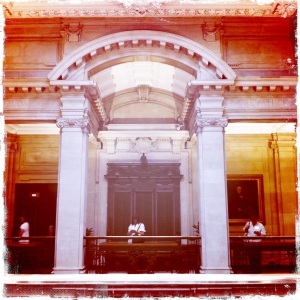 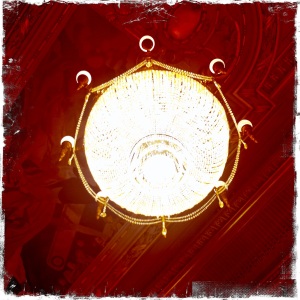 Why was it that when we were told at the conference that;

I was the only there who was ‘tweeting’/’live blogging’ from the conference? I was using technology (that was my own iPhone and didn’t cost the tax payer a single penny) to help other civil servants engage and get a glimpse into what was being said at the conference about the future of the Civil Service and their possible promotion opportunity.

I was sitting in an audience of hopeful SCS members, yet not one of them was using ‘technology’ or the conference organizers to deliver the message more cheaply. There needs to be a *radical* shift in our thinking if we are going to deliver more with less. I was practising what was being preached, but why was I the only one?

There are better ways at engaging and reaching your audience. I’ve grown to realise that I loathe the traditional types of conferences, and crave for the enthusiasm and engagement of an un-conference that is opened up to the internet and social media for those get involved that physically can’t be there. Also by using the ‘technology’ appropriately you should be seeing costs reducing, less people travelling and a carbon footprint reduction. People able to engage with the conference when they need to, and not having to be out away from their desks or meetings for the entire day.

Of course to adequately do this, you do need to have the IT infrastructure & necessary security protocols in place to allow your staff to have access to the live feed/social media channels. I am well aware that not all Departments will have the infrastructure, bandwith or capability to allow for this to happen without a significant amount of investment and a change in the way we think and operate with regards to IT, Security, Social Media and last of all…. conferences.

I had many civil servants tweet or DM me back asking what was happening in the conference.

I had asked the twitterverse should I even be tweeting from this event and was told unreservedly yes! It was the only way they had of finding out what was going on, even if it did depress them. So I continued tweeting updates from the conference to keep interested civil servants informed.

We had a range of speakers from Lord Bichard, Executive Director, Institute for Government to Sir Nicholas Macpherson KCB, Permanent Secretary, HM Treasury talking at us in the morning telling us what sort of future they saw for us – but very little in the way of answers to the questions that were being raised from the floor at the Q & A after each speaker.

And what a grim picture of the future they were painting for us.

I did think about going into great lengths as to exactly what was, but given the national press coverage recently about how this new coalition government is going to slash public spending, slash Civil Servants pay and pensions, downsize the civil service….. I think you can guess we were being told the party line on all of this, and being told to ’embrace’ these new ‘challenges’. It’s hard to get motivated when you are being attacked in the press constantly and your own political masters telling you that they are going to change the law in order to slash your pay and pension rights.

I know the economy isn’t as good as it could be, but the PCS union has tried to negotiate with both prior and current Governments, to come up with a package of cuts that would be acceptable to their members but it seems there isn’t the appetite for negotiation. They would rather go against a High Court ruling and legislate before negotiating.

As you can imagine, this isn’t particularity going down to well with PCS members of which there are a *lot* of in the lower grades below G7. And it’s being noticed higher up as well, with this anonymous Senior Civil Servant article in the Guardian.

Which I think, given the reaction on Twitter this morning to civil servants I know struck a loud resonating chord with them. It says a lot more than I could have ever said.

So what did I get from the conference?

There were a couple of good sessions that I enjoyed, and would have enjoyed more if there was more engagement across the Civil Service at these types of conferences. Session highlights for me were Richard Hillsdon, Development Consultant, Westminster Explained & former member of the SCS and Richard Calvert, Director General, Corporate Performance, DFID sessions.

These are strange days, and not particularity happy days.

Older: The last of the crumbs?
Newer: The Exodus begins….

6 thoughts on “#SCS2020 – Unlocking the Senior Civil Service and Cuts”