So, it’s been a week since I’ve updated this thing.

And what a week. I won’t pretend it’s been a great week. Far from it. It’s been difficult at best, and probably not going to be great for a while either.

But thats why we have friends isn’t it? When I’m not pushing them away, or shutting everything down inside they can be great source of comfort and inspiration. It’s just being able to do that…. not as easy as it sounds, but I’m trying.

Saturday to Wednesday, nothing much to report there. Unless you want to hear about me going to waking up hungover and going to work, not wanting to be there and pretty much just trying to get through the day. But I get through it, and arrange to meet up with Anna in the Heights for a couple of bottles of Chablis

All the way up to the 15th floor to the bar…. some fantastic views of London that you don’t usually get to see
But…

The bar decor leaves something to be desired… it’s as if it’s stuck in a 1980’s timewarp.
So after chewing the fat with Anna in the Heights we adjourn to Sergios for some much needed consumption of more alcohol and food.

It’s become a bit of regular haunt for Anna and I…  drinks at The Heights, then Italian in Sergios! Where the place is completey adourned with pictures of the owners and it’s famous patrons.
So, we munch down on our starters;

Ministroni Soup for Anna.
Our starters are quickly devoured, I guess we didn’t realise how hungry we just were. The mains are quickly followed, Monk Fish for me and gosh.. I can’t remember what Anna had, but by then we’d drank a fair chunk of wine.
Anna pours herself into a cab, I wander down onto Oxford Street to hope on the no. 73 bus 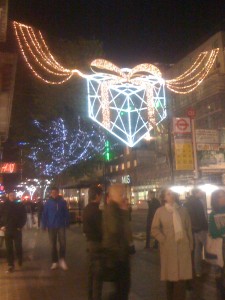 and yup, all the Christmas lights are on in full force on Oxford Street.
Popped into the Londesborough for a swift lonely nightcap

Then it’s a stagger home and snooze.
Thursday
It’s a painful start to the morning…  but I get through the day, after sorting out a lot of issues back in the office, hopefully putting out a few fires and leave early because tonight I’m meeting up with Jim, a friend of Joe’s – the Glasgie boys.
We arrange to meet up in the Slug and Lettuce at 5pm, we chew the fat and catch up… it had been ages since we’d last seen one another. After a few in the Slug, we adjourn to the Greencoat boy for one

Just the one!
By then the hunger pangs had started to kick in so we started wandering heading back Victoria way but of course we wander into another pub on the way.. The Cardinal.

A Sam Smiths pub… cheap and cheerful.
Again, just the one in there cause by then we were BOTH starvin marvin and needed nutrition and not of the liquid kind. So off we went to Loco Mexicano for some mexican…. margarita… and wine… 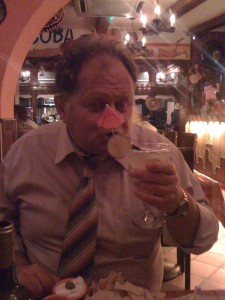 Me thinks he struggled a bit with the tequilla…
Once we demolished all of that… it was a stagger back to Victoria where we went out seperate ways and I eventually get home, bed, sleep.
Friday
Gah… another sore head.
Spent the morning sorting out Budget figures with management, then got a phonecall from Anna – she was in the building for a meeting, did I want to meet and do lunch?
Uhm, hell yes.
We meet up, pop down to the Westminster for a spot of lunch and a pint;

Then it’s back to the office.
Now, I was still stuffed from the night before… the Mexican… and the night before that… the Italian. I can’t really manage much food. And that’s a bugger… cause this evening?.. The work crew are all heading out for a curry…  yikes.
When I’m back in the office, I see that the article has been published…. Remember the 8:30am Round Table discussion I went to a few weeks back in the Atruim?… Well, yup..  it’s now in print… Civil Service world. All the way throughout the article I’m quoted as ‘Baskerville said’..

So from now on, you all have to do as I say… cause Baskerville said so 😉
Once I’m finished up with all the loose ends in the office I head down to the Marquis of Granby to meet up with the rest of the crew.

I’ve still got that stuffed feeling….  and the pub? Urgh… I hate it. There’s 12 of us there…. but it feels like every other civil servant is also here cause the pub is absolutely hoaching.
I’m getting that claustraphobic feeling again… space, so need space.
I opt to nip outside quite a few times with Mark when he goes for a ciggie…  not that I’m smoking, I just need to be outside away from the crowd. Eventually, we leave and head to the Cinnamon Club

For a rather, very rather tastey 3 course meal with complimentary cocktail….

12 civil servants… drinking various amounts of wine, wine and more wine.
I think some of us were more slightly well oiled than others… cause I was doing fairly well. Hadn’t mangaged much food cause I was still stuffed, but then again, I wasn’t really drinking that much either. Wasn’t really in the mood to be honest.
We settle up on the bills;
And head to the Speaker for a night cap and a little game of “I have never” ….

I think that’s where we eventually finished wee Allison off. Cause after a couple of drinks in the Speaker, we all head our seperate ways and I’m on the bus heading back to Stokey when I get a text from Karen.

“OMG, Allison just fell down the gap between the platform and the train!”

A few more texts later I establish that it took 20mins for 4 people to pull her back out, delaying the train.. Karen had then missed her last train… Lucikly for Allison, it seems that the sheer amount of alcohol has stopped her from feeling the actual pain, as she was giggling non-stop on the train and wouldn’t be quiet.

But, Karen got her back safely to her own house and crashed over…

I went home, watched some TV. Wasn’t really in the mood for logging into SL after being surrounded by people for the whole evening, thus finally switched the lights off around 1:30am and sleep.

Today
Nothing much… long lie in, got woken up by a Labour person wanting to sign me up for some election thingy… urgh, not interested. I have enough of politics at work… don’t want to be dealing with that outside of the office.

I check in with Karen who has bought provisions, and has made her own way back home leaving the now sober, hungover and slightly sore Miss Perkins to recover.

So, all is well I guess.

Apparently Felicity is going to be in Stokey at some point today. Will wait and see if that happens. If it does, then it could be a Pint & Pizza in the Shakey, if not….well. Another quiet day then I guess.

07 Nov This entry was published on November 7, 2009 at 12:27 pm and is filed under Personal Blog. Bookmark the permalink. Follow any comments here with the RSS feed for this post.

Older: Survival of Mordor
Newer: Wow.. What a flippin week!